Hobart’s new LXe and Advansys LXe Undercounter Warewashers represent the next generation of dishwashing solutions for restaurant, bar, coffee shop and health care facility operations. The LXe base model and Advansys LXe, which is available in high-temp and low-temp models, have been designed from the ground up to support best-in-class wash performance and are ENERGY STAR® qualified for energy- and water-saving capabilities. 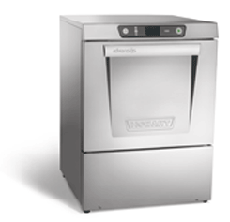 “Operators can choose the standard LXe model or upgrade to the Advansys LXe for advanced energy, water and cost savings compared with traditional undercounter warewashers,” said Carrie Hoff, product line manager, Hobart Warewash. “All three models occupy a small undercounter footprint and include features that simplify operation and maintenance, which can help the operator achieve greater levels of efficiency and productivity.”

Key advantages of the Advansys LXe are highlighted below:

The Advansys LXe high-temp model is the first undercounter in the United States to feature Hobart’s patented Energy Recovery technology. This advanced feature recycles hot water vapor produced during the wash and rinse cycle and uses it to preheat cold inlet water. Energy Recovery not only saves energy, but it also reduces steam released into the air, improving both the operator and customer experiences. Based on energy audit results, the Advansys LXe high-temp model can save up to $485 per year in reduced energy and HVAC costs based on 60 cycles per day.

The Advansys LXe low-temp model includes PuriRinse—a fresh-water rinse after the chemical sanitizer cycle. PuriRinse is designed to remove chemicals that can have a negative impact on the flavor and presentation of the beverages when they are served. Hobart and researchers at The Ohio State University worked with the U.S. Food and Drug Administration and the Environmental Protection Agency to amend the Food Code and sanitizer-label specifications, respectively, and permit units with PuriRinse to use potable water to remove chemicals used in the rinsing and sanitizing cycles.

The Advansys LXe lets operators choose from three different cycles: light, normal and heavy. Three cycles provide operators with the flexibility to clean lightly soiled ware quickly and still keep up during high-demand times. In addition, the Advansys LXe high-temp model is the only undercounter to achieve the NSF Pot and Pan rating on the heavy cycle.

Both the LXe and Advansys LXe feature improved displays that simplify operation and maintenance. For example, the Smart Display on the Advansys LXe informs the operator of common maintenance operations, like auto deliming or clogged wash arms, without using complex error codes.

The LXe features redesigned, easily removable wash arms—useful for easy declogging, should it ever be necessary. Additionally, the Advansys LXe features snap-in rinse arms that are even easier to remove and install.

An extra-deep strainer system on the LXe keeps debris from entering the pump and motor area, preventing damage and costly maintenance. This deluxe strainer system is also easy to remove and clean.

The new Hobart Advansys LXe will be featured in the WHAT’S HOT! WHAT’S COOL!® new product gallery at The NAFEM Show held Feb. 7-9, 2013, in Orlando, Florida. For more information about the Hobart LXe and Advansys LXe, visit www.hobartcorp.com/products/commercial-dishwashers/undercounters.

Hobart is the world leader in commercial food equipment and service for the foodservice and grocery industries. An ENERGY STAR® Sustained Excellence award winner in 2010, 2011 and 2012 and ENERGY STAR Partner of the Year in 2008 and 2009, Hobart manufactures products for warewashing and waste handling; food preparation; Baxter bakery; cooking; weighing, wrapping and labeling systems; and Traulsen refrigeration. Hobart equipment is supported by a national network of factory-trained service representatives in hundreds of locations across the United States. To learn more about Hobart, visit www.hobartcorp.com/, connect on Facebook at facebook.com/hobartfoodequipment or follow on Twitter at twitter.com/hobartusa.