Over a Century of Innovation

About Us > Celebrating 125 Years > History 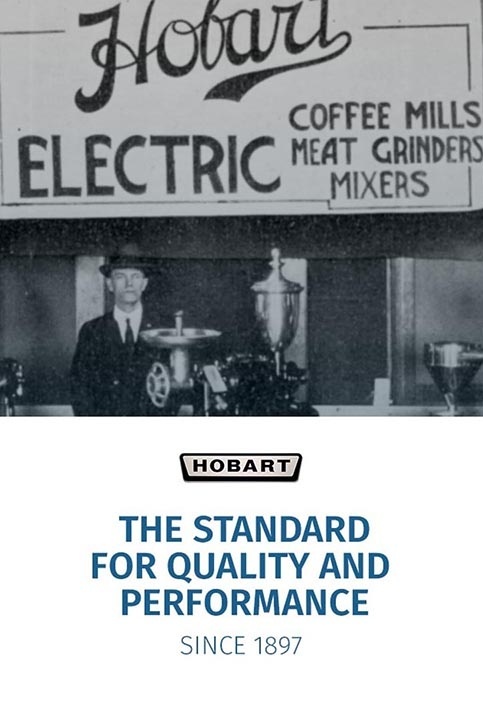 For 125 years, Hobart has supported the food equipment and service needs for the foodservice and food retail industries.

March 19, 1891: The first computing scale measuring not only weight but also price and value is introduced by the Dayton Scale Company.

1903: Hobart motors are sold to merchants who, with the help of Hobart representatives, belt them to the large flywheels of hand-operated coffee mills, producing the world's first self-contained, powered coffee mills.

1905: Hobart expands its product offering with the introduction of electric meat choppers.

1909: The Model 232 Chopper is introduced to large-volume retail operations.

1913: The company reoganizes as the Hobart Manufacturing Company. Sales for the year surpass $1 million.

1914: The introduction of the Model A-80 ushers in Hobart's dominance of commercial mixers.

1916: The opening of the self-service store, Piggly Wiggly, in Memphis, TN, heralds the beginning of the surpermarket chain concept.

1918: Coffee retailing takes a step forward with the introduction of the Model 28 Coffee Mill.

1919: The mixer that will win "Oldest Running Hobart Mixer Contest" in 1990 is built and sold to Von Hatten's Bakery in Fort Smith, AR.

1922: The Model 13230 Combination Meat Chopper and Mixer, the precursor to mixer/grinders, debuts.

1925: Hobart's workhorse, the Model M-80 Mixer, is added to its product offering.

1928: The Hobart Model 6030, the first commercially successful potato peeler design on the market, is introduced.

1929: The American Culinary Federation is founded.

1933: Hobart beats the competition to the market with the introduction of an air whip for preparing whipped or creamed toppings for baked goods.

1933: The National Association of Food Chains is founded.

1936: Professor Albert Raimon, the inventor of Chiffon fabrics and a pioneer in cosmetics mixes his first batches of makeup in a Hobart M-80 Mixer.

1940: The S.S. America, the largest, speediest and safest vessel ever built in an American shipyard, is outfitted with 21 Hobart food machines.

1942: Hobart supplies the war effort with high-precision instruments and ordnance items such as telescope mounts and fire control generators. For its manufacturing achievements, Hobart receives five Army-Navy E Awards for Excellence in Production.

1944: The National Sanitation Foundation is created.

1946: The new 600 Series "Moneyline" Scales offer readability from any angle.

1953: High-volume retail operations receive help with the introduction of the H-600 Mixer and the Model 4052 Chopper.

1957: The International Society of Food Service Consultants is founded.

1959: The introduction of the 1612 and 1712 Automatic Slicers brings "hands-free" convenience to retail stores.

1960: The International Franchise Association is founded.

1964: Hobart is first listed on the New York Stock Exchange.

1964: The International Dairy-Deli-Bakery Association is founded.

1965: High-volume meat processing improves with the addition of the Model 3000 Automatic Weighing and Wrapping System and Hobart’s first Mixer/Grinder, the Model 4356.

1972: The Automatic Patty Machine is introduced to the trade.

1973: Hobart pioneers the use of universal product symbols that would later become the current UPC system.

1973: The North American Association of Equipment Manufacturers is formed.

1977: The Food Marketing Institute is formed from the merger of the Super Market Institute and the National Association of Chain Stores.

1980: The company purchases the Commercial Cooking Equipment Division of General Electric in Chicago, IL. Convection ovens and other cooking equipment are now available under the Hobart label.

1986: The FDA bans all use of saccharin in food, cosmetics and over-the-counter drugs.

1986: The introduction of the HiLite Labeler helps retailers merchandise product.

1989: Adamatic, a manufacturer of turnkey bakery packages, is acquired.

1989: Environmental concerns from consumers cause manufacturers to rush to market with a number of “green” products.

1995: In-store foodservice programs receive a boost with the premier of the Hobart Combination Oven/Steamer.

1997: Debut of the TurboWash System, the Flashbake Oven, the HSRO Single Rack Oven and the MG-1532 Mixer/Grinder give retailers a full offering of cost and labor-saving products.

1999: Hobart 410 “Streamliner” meat slicer, first produced in 1944, joins world tour as part of an exhibition on the American Century in art and culture. The Hobart 410’s shiny, curvy shape provided a metaphor for speed, control and progress.

November 11, 2000: When the “West Wing” TV drama series was ready to construct a cafeteria for the White House, they wanted the highest quality equipment from a respected and recognized company. Hobart stood out as the right choice.

2001: Hobart becomes the first food equipment manufacturer to include built-in antimicrobial product protection in food equipment in an agreement with Microban Products Company. The protection is built in to the 2000 Series Slicer, continually inhibiting the growth of bacteria, mold, mildew and fungi.

May 19, 2001: Hobart announced an agreement with Microban Products Company that would make Hobart the first manufacturer to include built-in antimicrobial product protection in food equipment for the foodservice industry.

January 19, 2002: Hobart receives the Award of Excellence from the American Culinary Institute for its dough mixer.

February 25, 2002: Hobart and Traulsen announce the consolidation of their product lines, bringing the foodservice industry’s preferred brands together—Hobart warewashing, food machines, cooking and weighing and wrapping equipment as well as Traulsen refrigeration. Both Hobart and Traulsen are now supported by the most comprehensive sales and support organizations in the food equipment industry.

March 1, 2002: Hobart partners with American Express Business Financing and announces the industry’s first zero percent financing promotion designed to assist the foodservice industry during the most challenging economic climate in more than a decade.

July 5, 2002: Hobart is the official mixer provider and sponsor of the U.S. Team in the World Pastry Team Championship. The U.S. Team wins the competition over the best pastry chefs from 11 other countries around the world.

2002: Web Marketing Association recognizes Hobart’s Website with its “Standard of Excellence” for the fourth straight year.

2003: Hobart introduces the Legacy™ Mixer, the most significant new mixer design in 50 years, which earns the company an honorable mention as Manufacturer of the Year by the Foodservice Consultants Society International (FCSI).

2003: Hobart and Traulsen are the first manufacturers to register as NAFEM Data Protocol compliant-ready with the Hobart LXi warewasher and the Traulsen R- and A-Series and full-size undercounter refrigerators and freezers.

2003: Hobart introduces the CleanCut™ slicer blade with a high-tech alloy that keeps the blade sharper, more durable and easier to use.

2004: Hobart introduces the revolutionary Opti-Rinse™ System spray nozzles on its conveyor and flight-type dish machines. The system reduces water and energy consumption by more than 50 percent, compared to previous machines.

2005: Hobart redesigns its multiple-award-winning Hobart Website with fresh content and new navigation targeted to specific segments within the food industry, to include both foodservice and food retail.

2005: National Restaurant Association panel of judges selects the Legacy Mixer and the Opti-Rinse System as winners of the Kitchen Innovations Award.

2006: Hobart earns overall “Best-in-Class” for the sixth straight (and every) year in an independent survey of consultants, dealers and broadliners sponsored by Foodservice Equipment & Supplies magazine.

Don't worry. Great things didn't stop happening after 2006. We're just working to determine which exciting stories and innovations to share. If you have any questions or are interested in learning more, please contact us. We'd love to hear from you.